Added option to not use date folders within the new reports file folders. 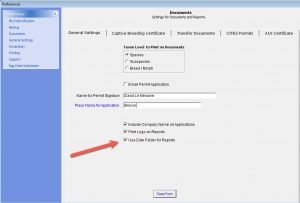 In the preferences you can now turn off the use of date folders within the reports folders when creating PDF or word reports.

This was added at the request of a user who creates their CITES export permit application as they ring chicks and then submits them at the end of the week as a group, rather than daily.

The CITES Export permit application would then all be saved in

rather than in subfolder with in that such as:

Fixed an issue with Word output of CITES and A10 permit application.

When outputting to word rather than PDF for CITES permits the vertical word APPLICATION on the left hand side of the application was printing horizontally rather than vertically.  This is now fixed.

The UK CITES Management Authority made some very minor changes to the layout of wording on the application forms, this is now reflected in the copies AIMS produces.